Today I finished the other high voltage box. For this one I could make a bottom plate again to screw all of the parts onto. This box is also pretty important, the distribution is made here for the charger (to charge the battery pack) and dc-dc converter (to keep the 12V battery charged). For both there's also a seperate fuse. 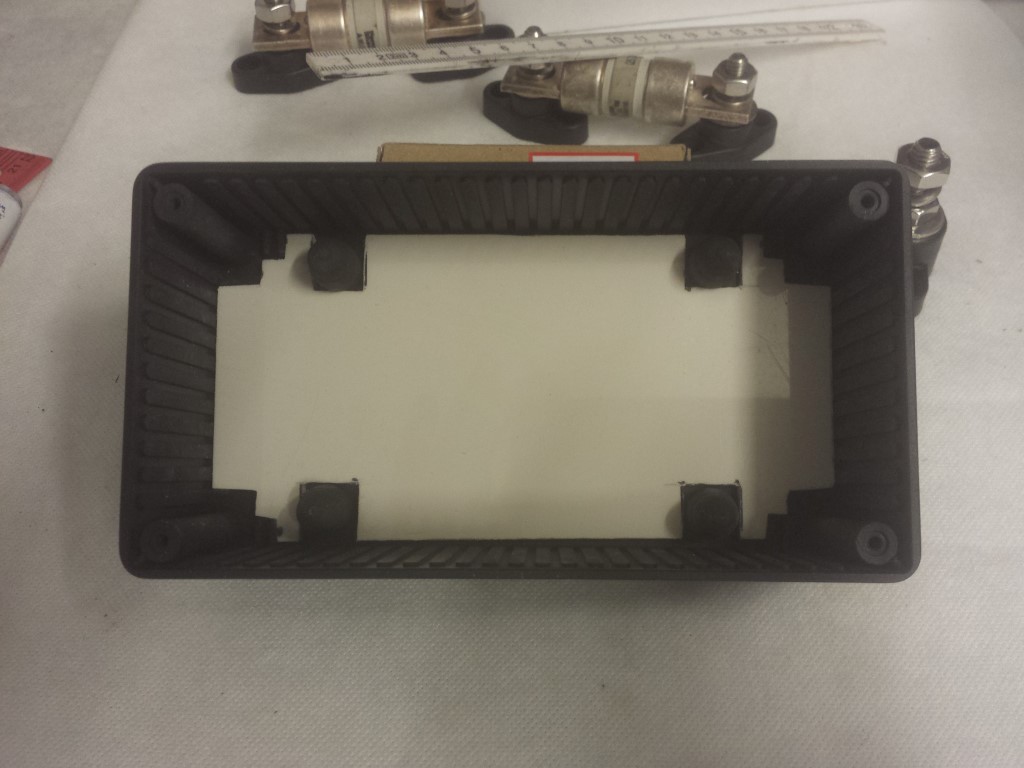 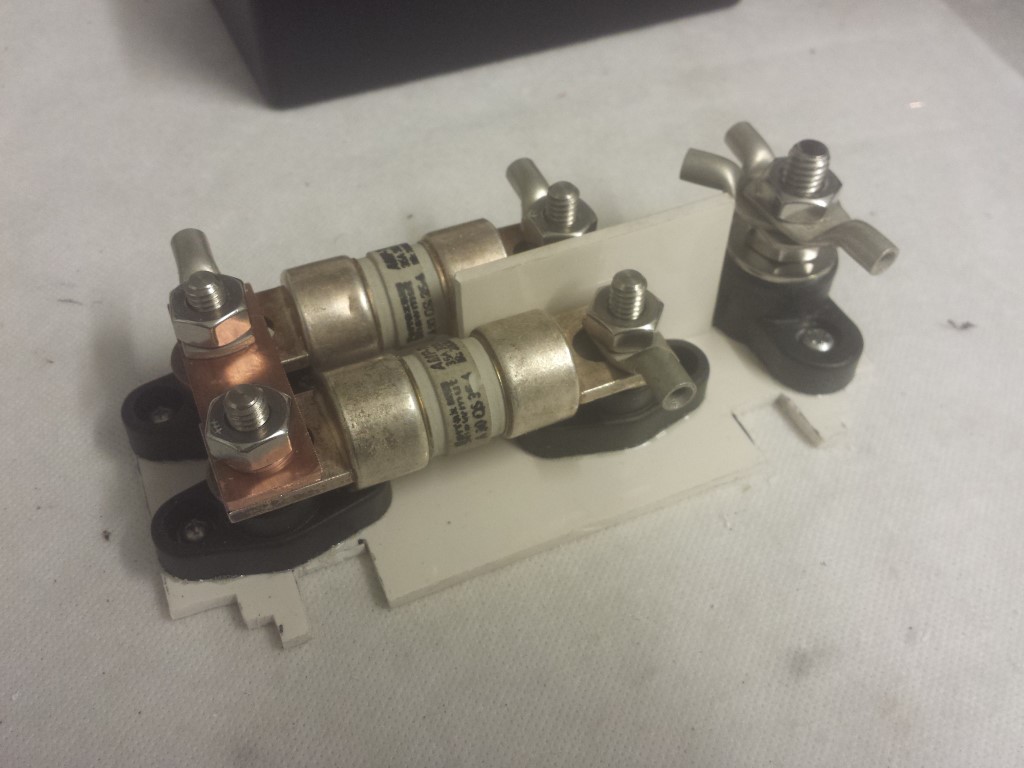 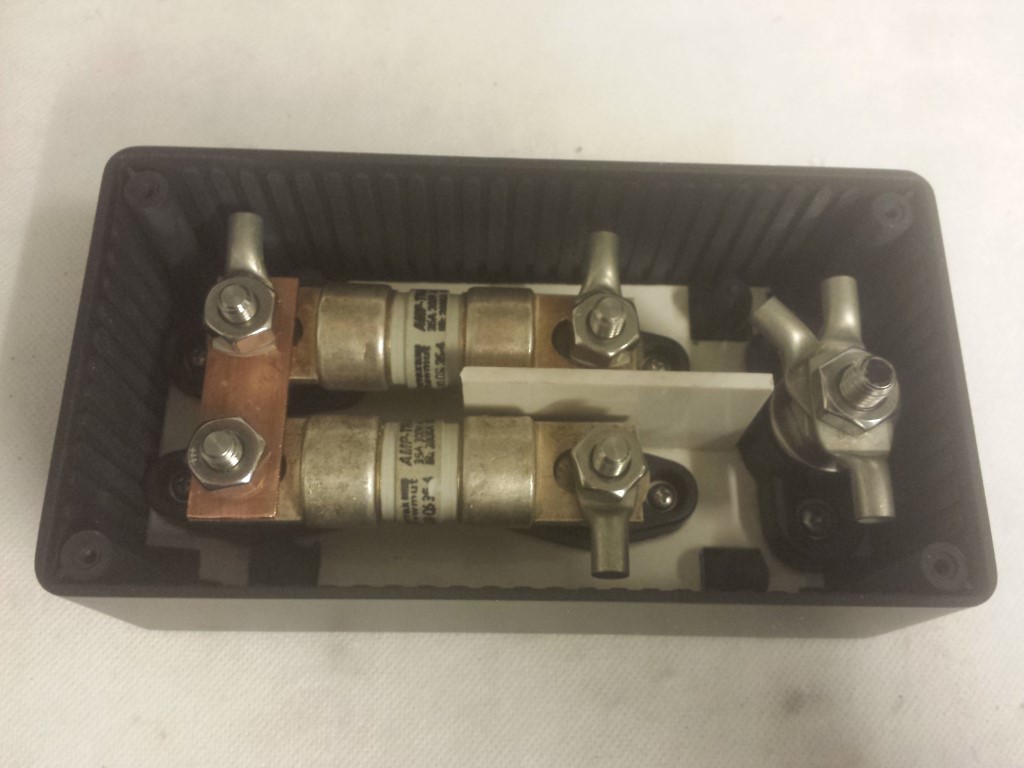 Tomorrow I'll have to check what I all need now of connectors and cable glands, then I can hopefully place a few of the boxes in the frame already this weekend.

Tonight I finished the first box with high voltage parts. Had quite some work with this one since the standard mounting points weren't really useful and the box is also too low to make a plate for the bottom. Was also quite tricky to decide where to place everything, still is far from ideal but I can't really think of any better way. 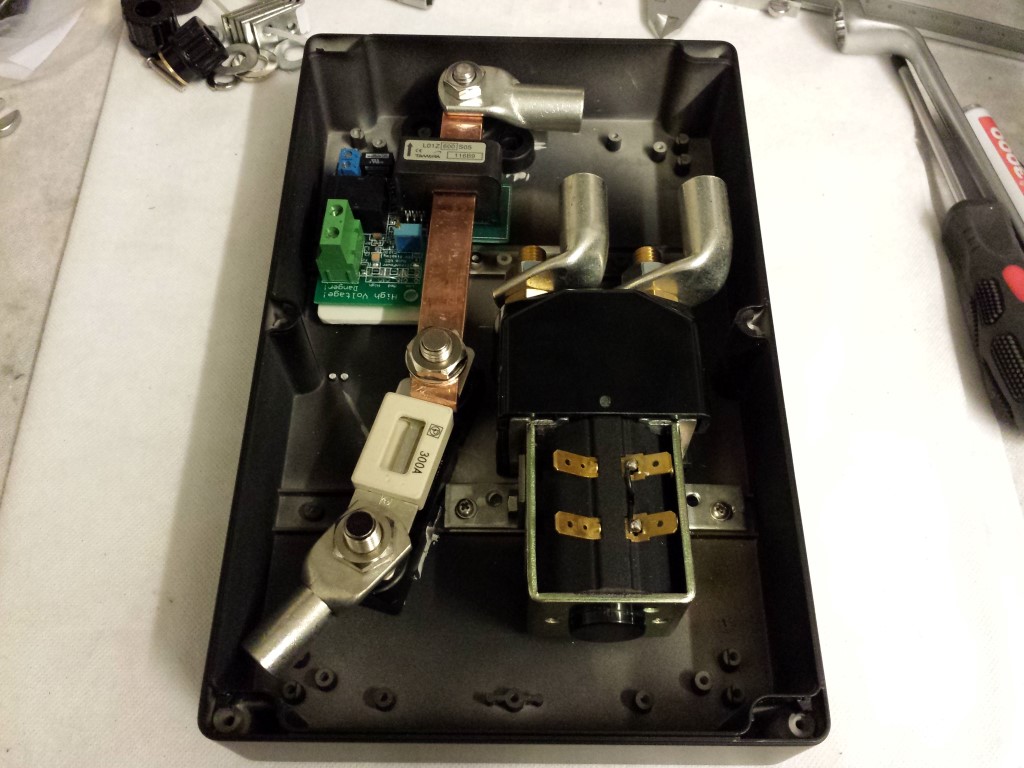 In this are the main contactor (splits the battery pack in two to safely work on it and for emergencies), sensor plate for EV Display (gauge) and the main fuse. The orange cables I still have to connect, will do this once all of the boxes are done and placed in the frame. I did however connect the 12V part already, wasn't really much work for this box. 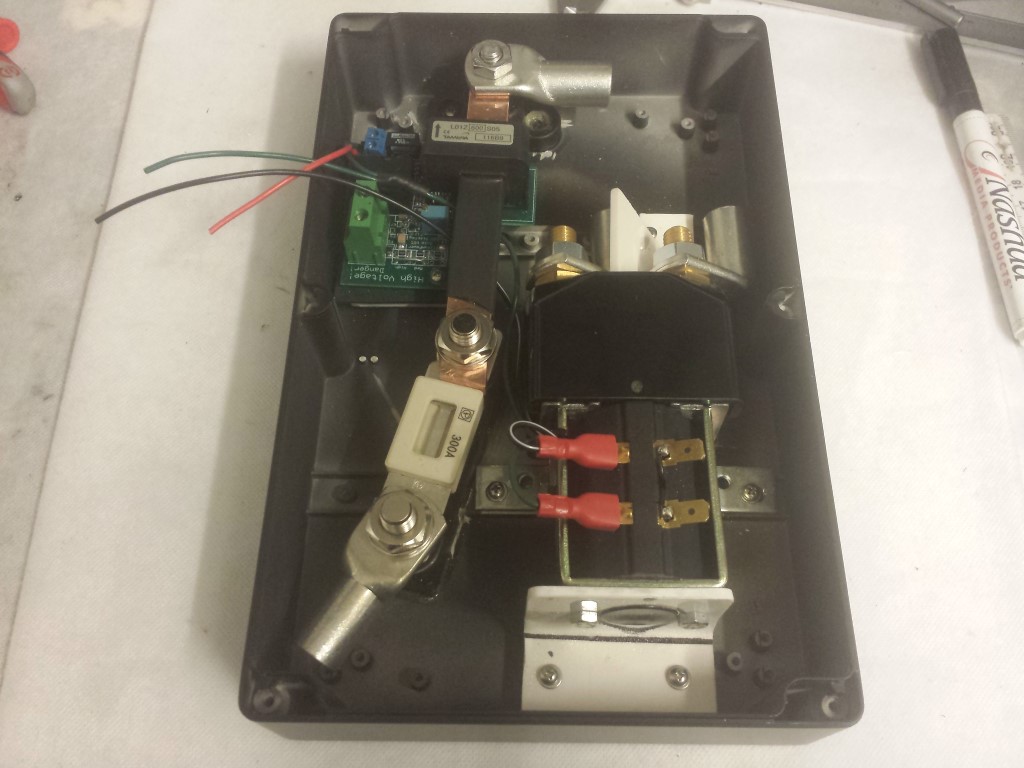 I also started with the last box already, this one's easier and will probably be finished tomorrow already. Meanwhile 15 of the 24 batteries are also charged already. So this weekend I hope to have them all charged. Then I can finally start placing them in the boxes and in the frame.

Today I finished the second box. It's also completely stuffed now with only relays. 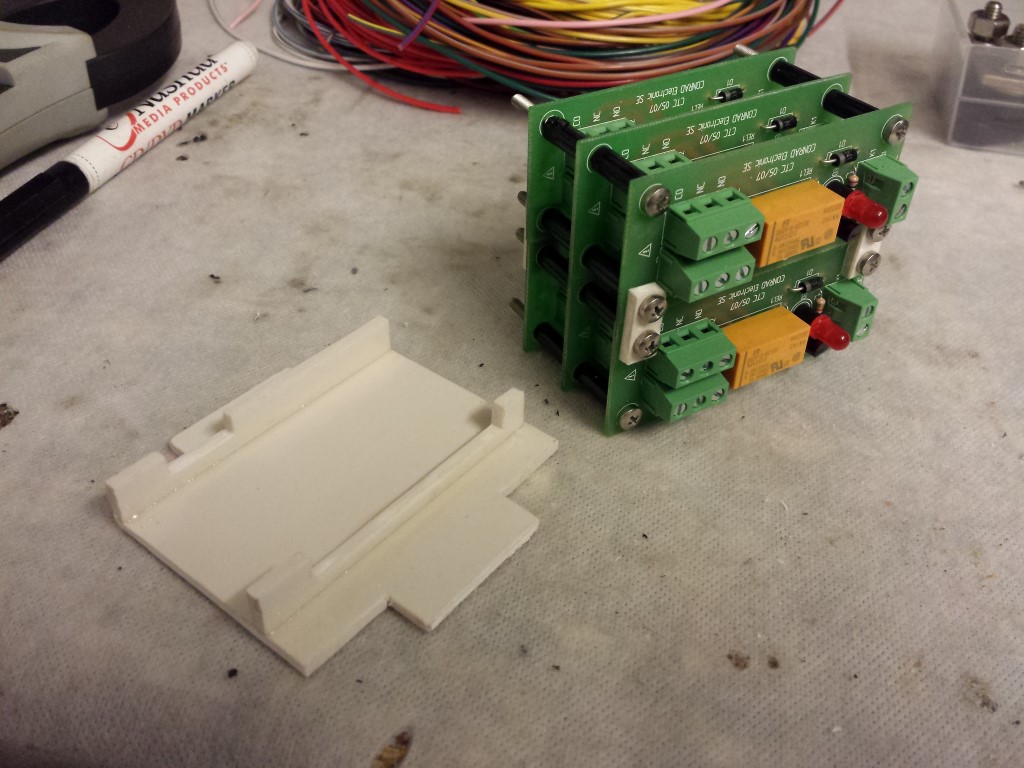 All wires connected again like in the diagram that I made a while ago. There are quite a few. 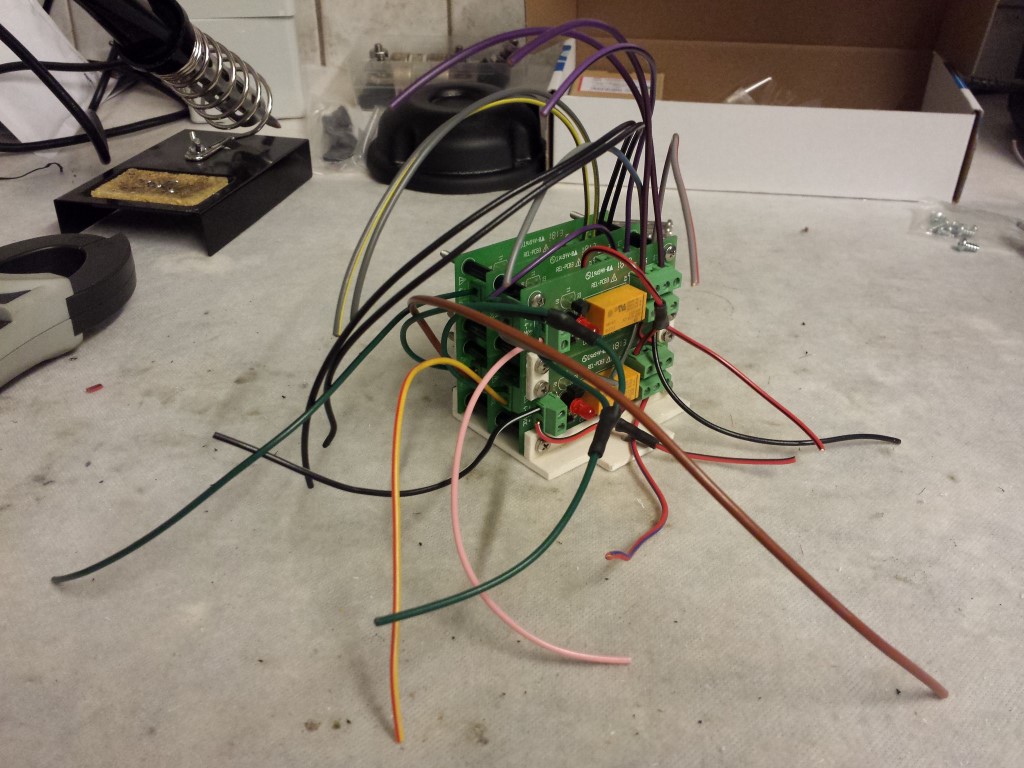 It all barely fits in the box. With this one I'll also add a cable gland so all of these wires can go outside. And I'll spray it black myself tomorrow. Wasn't really planning on using this one, that's why it wasn't sprayed together with rest of the boxes. 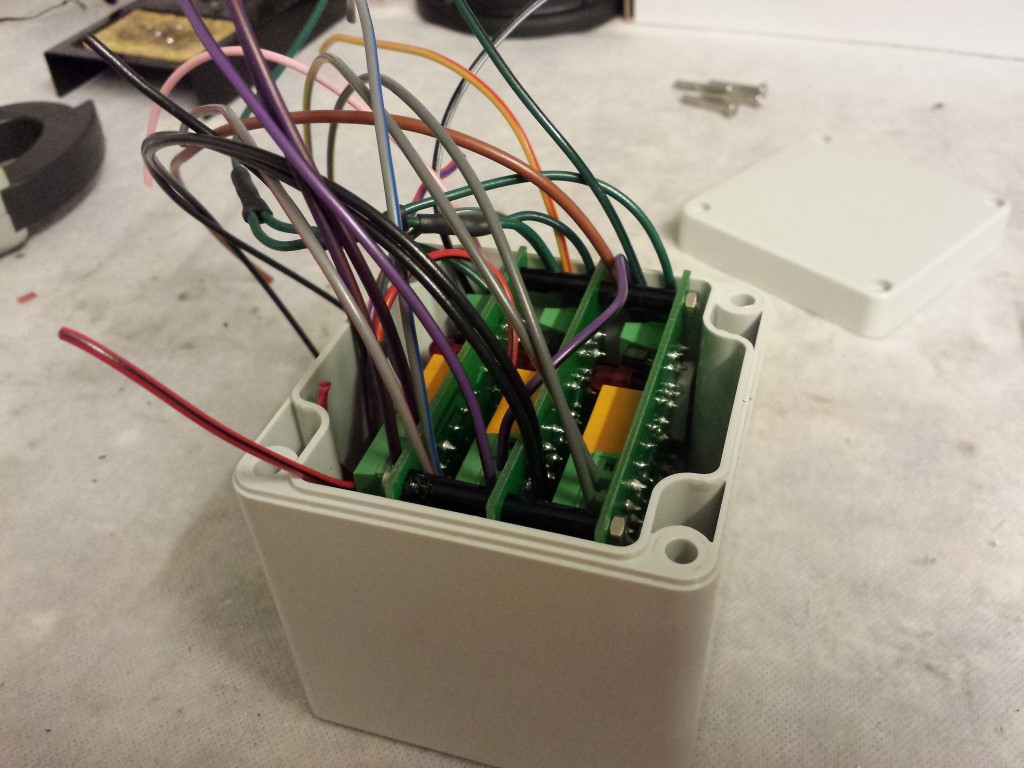 Meanwhile I'm also busy charging all of the batteries one by one to the same level. Takes about 1,5 hour for each battery so it'll still take me a while. 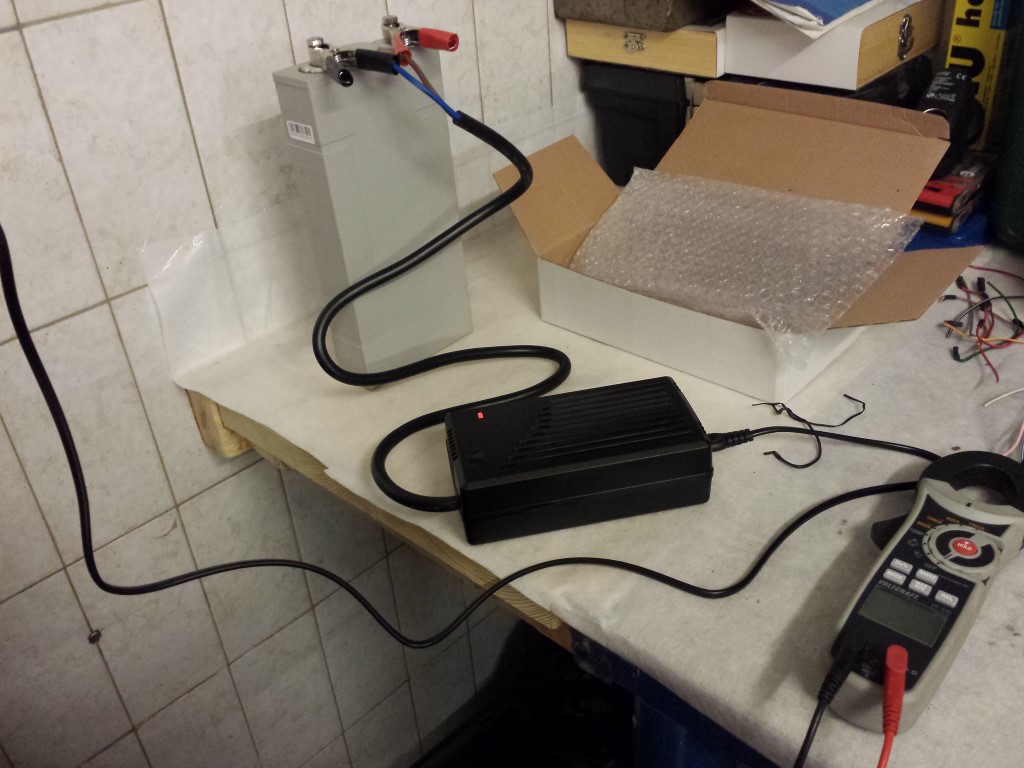 Now I still have to finish 2 more of these kind of boxes, only after that I'll start with the battery boxes. 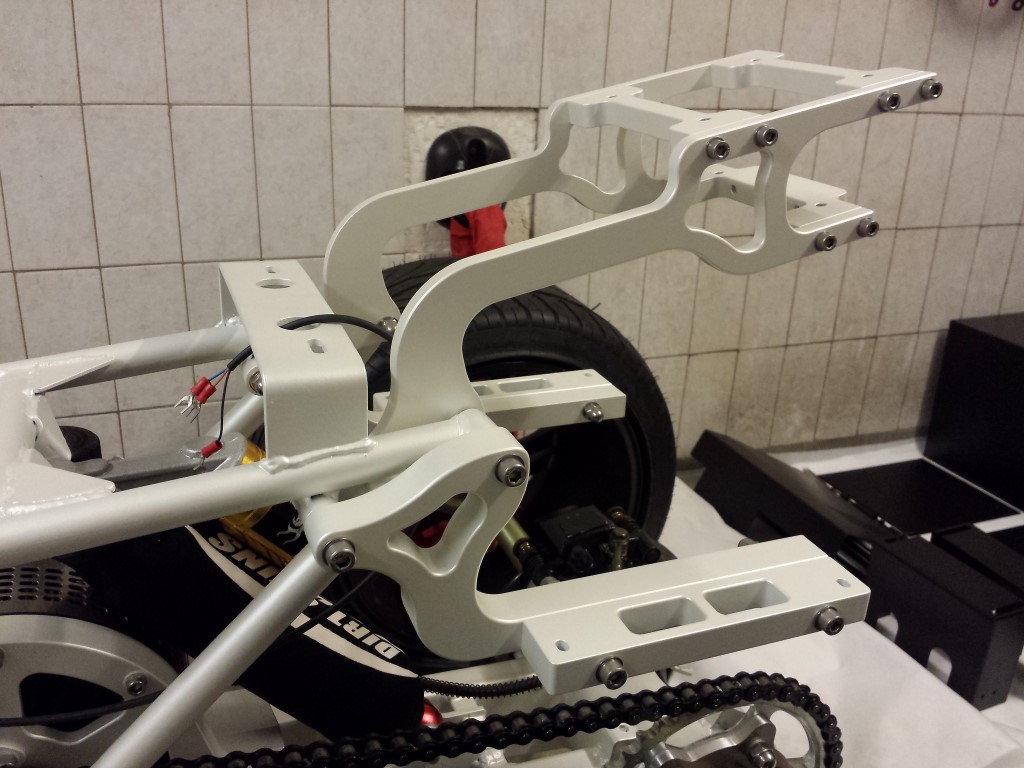 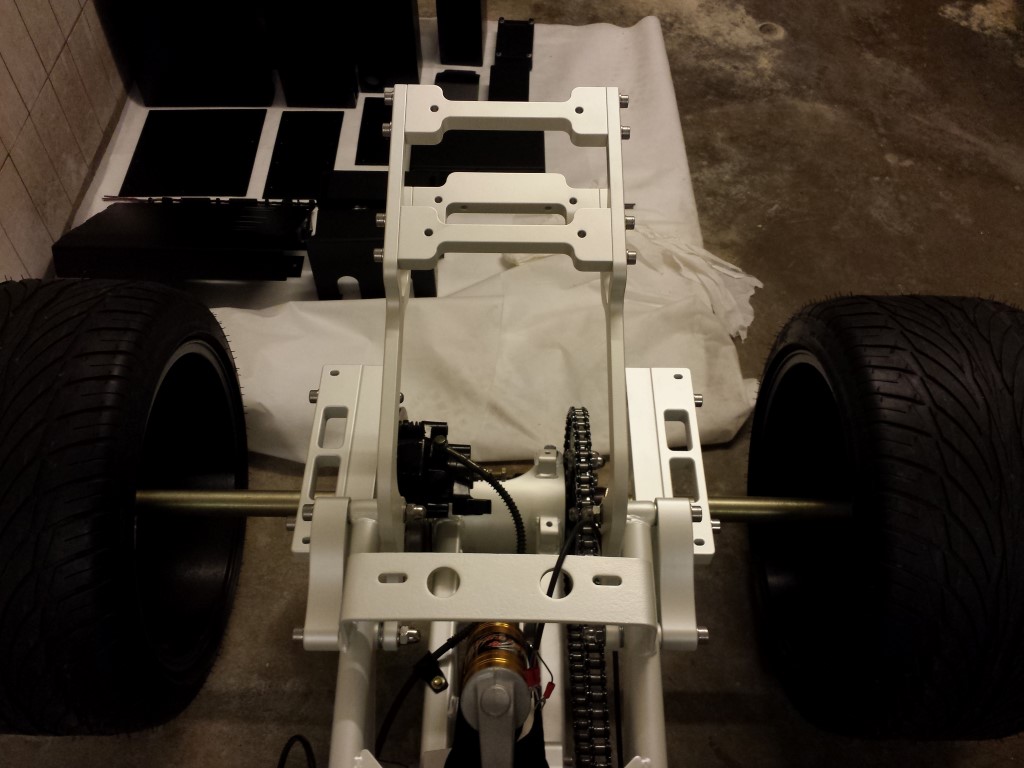 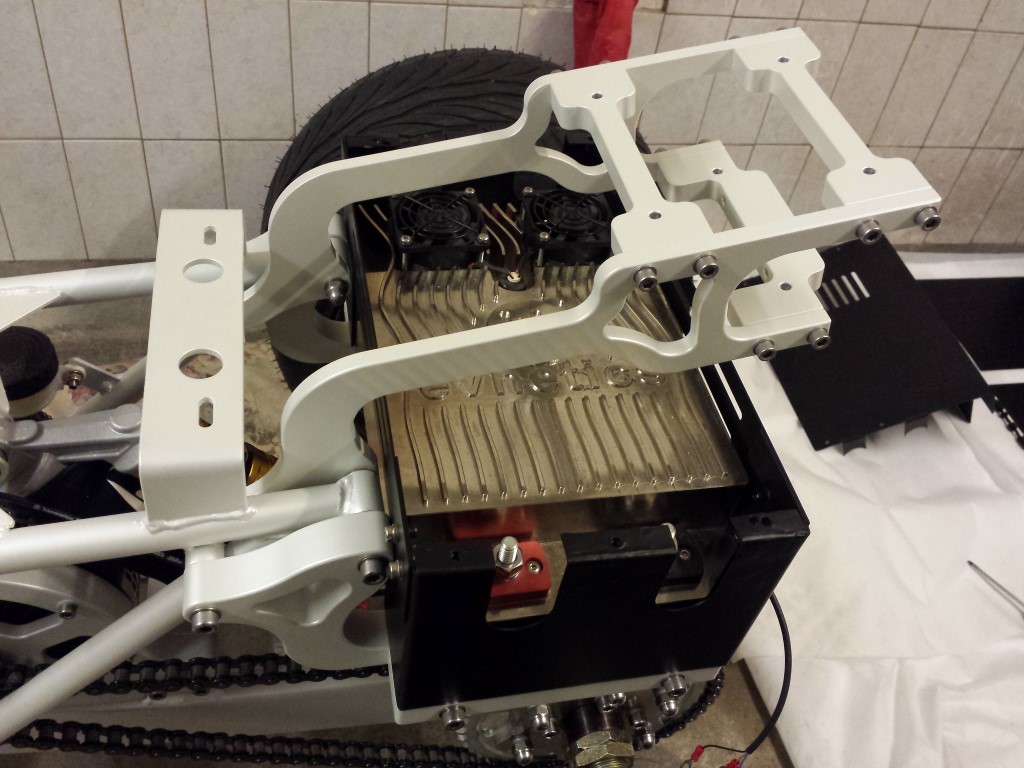 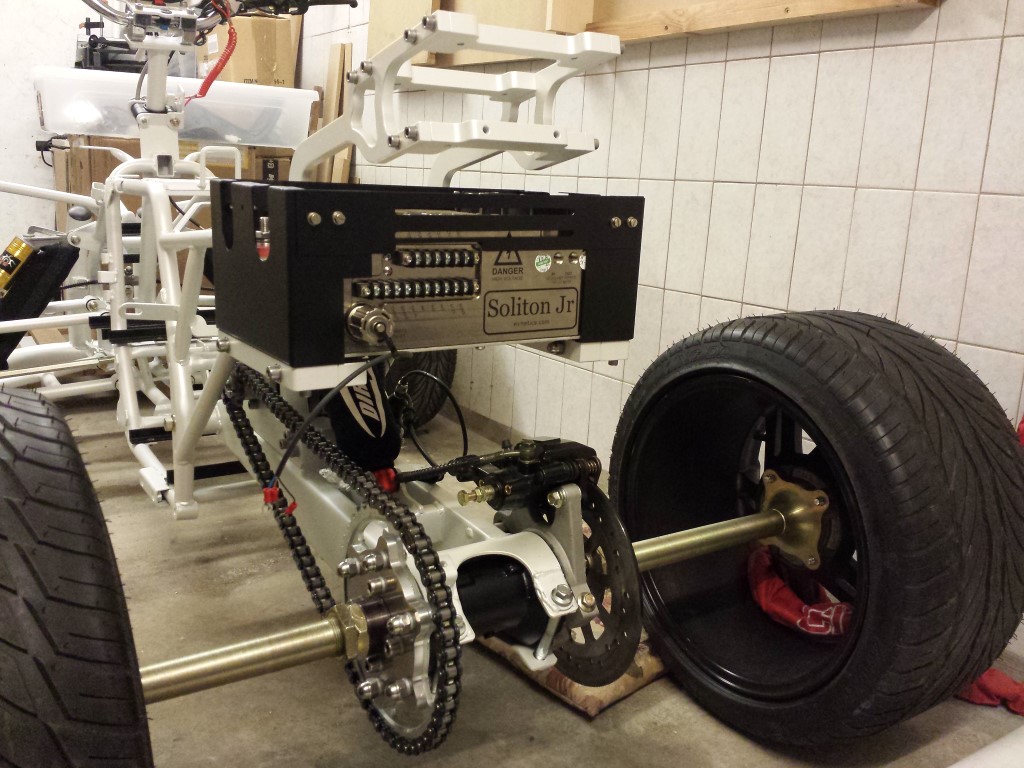 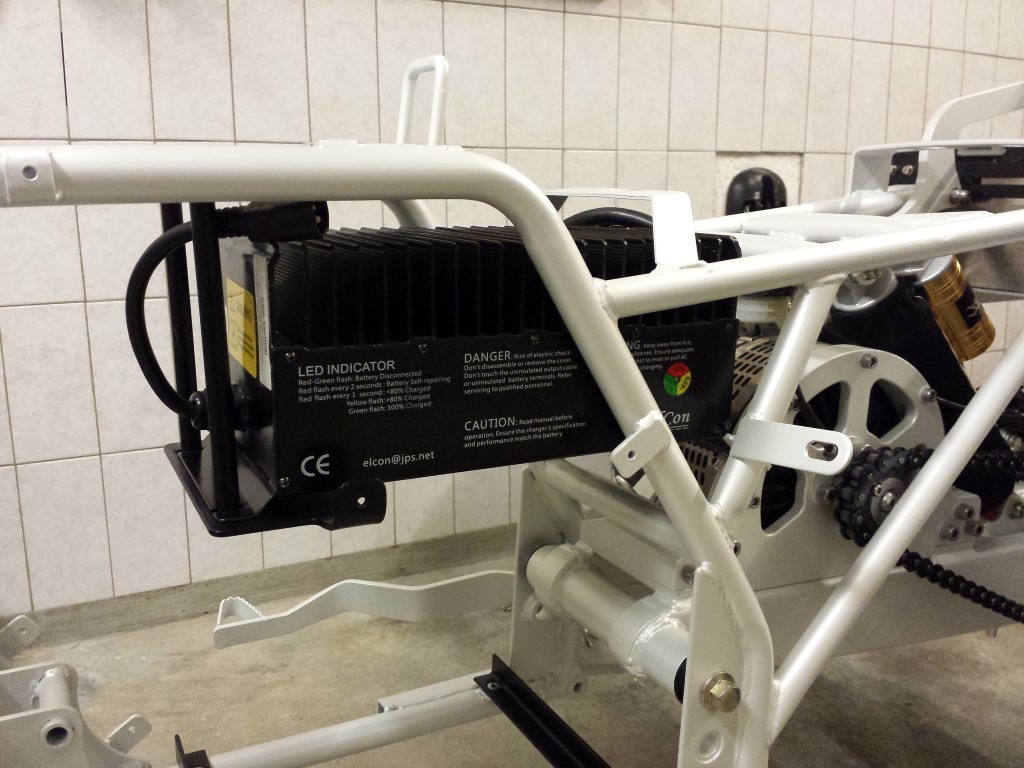 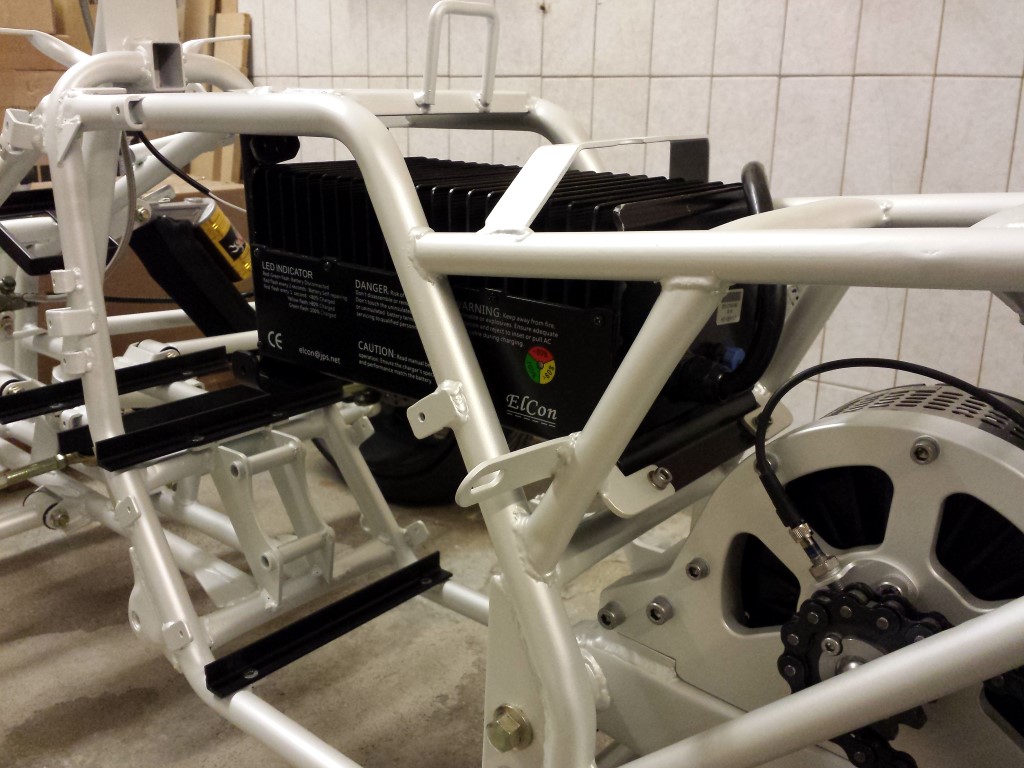 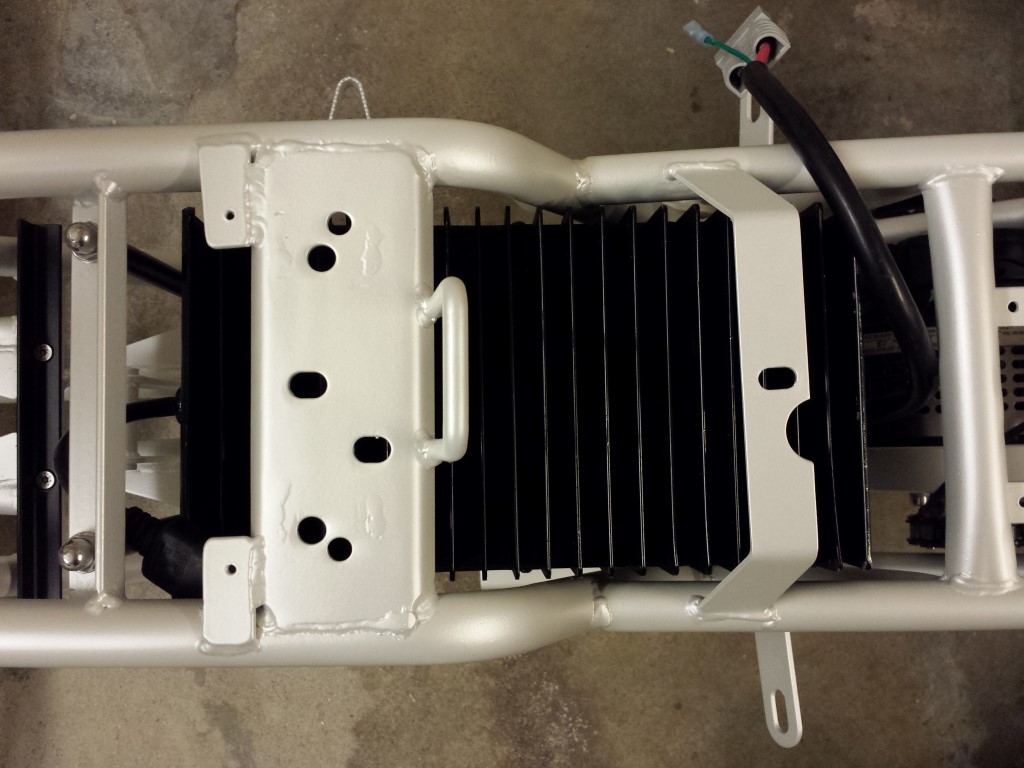 Today was a very productive day. The quad bike is nicely standing on 4 wheels again. This morning I started with attaching the motor to the rear swingarm. I just needed a rubber hammer to get it on there because of the thick layer of paint on the blocks and plate but at least it's firmly on there now. 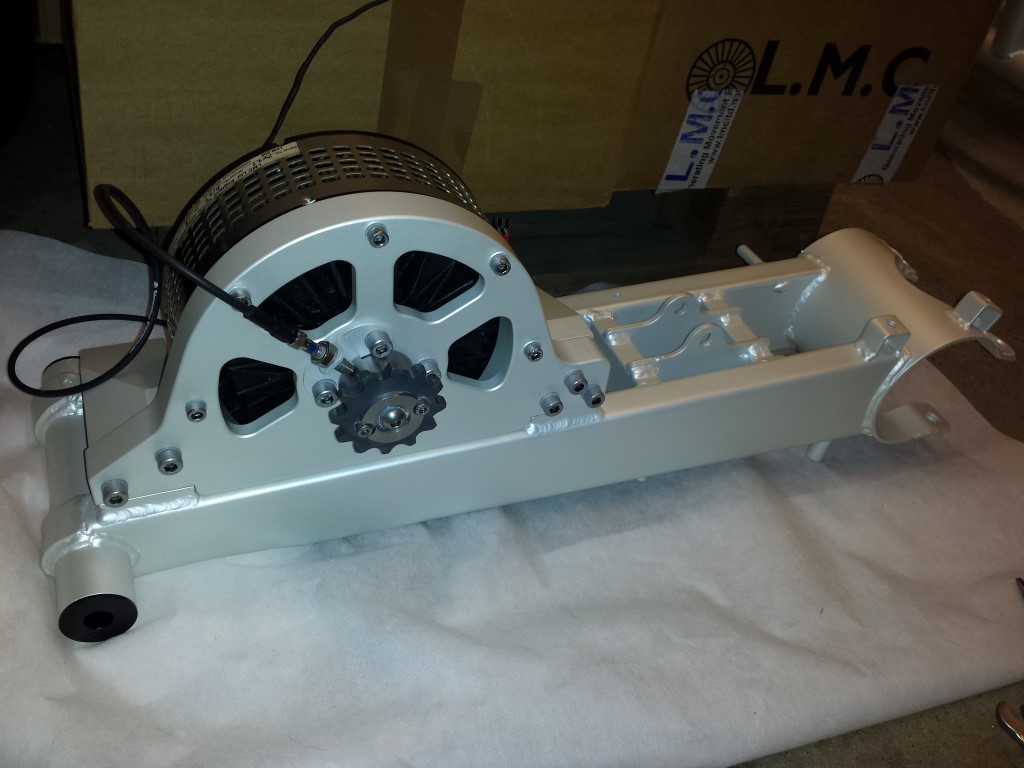 I also placed the new protective cover on it. Definately looks much better than the original. 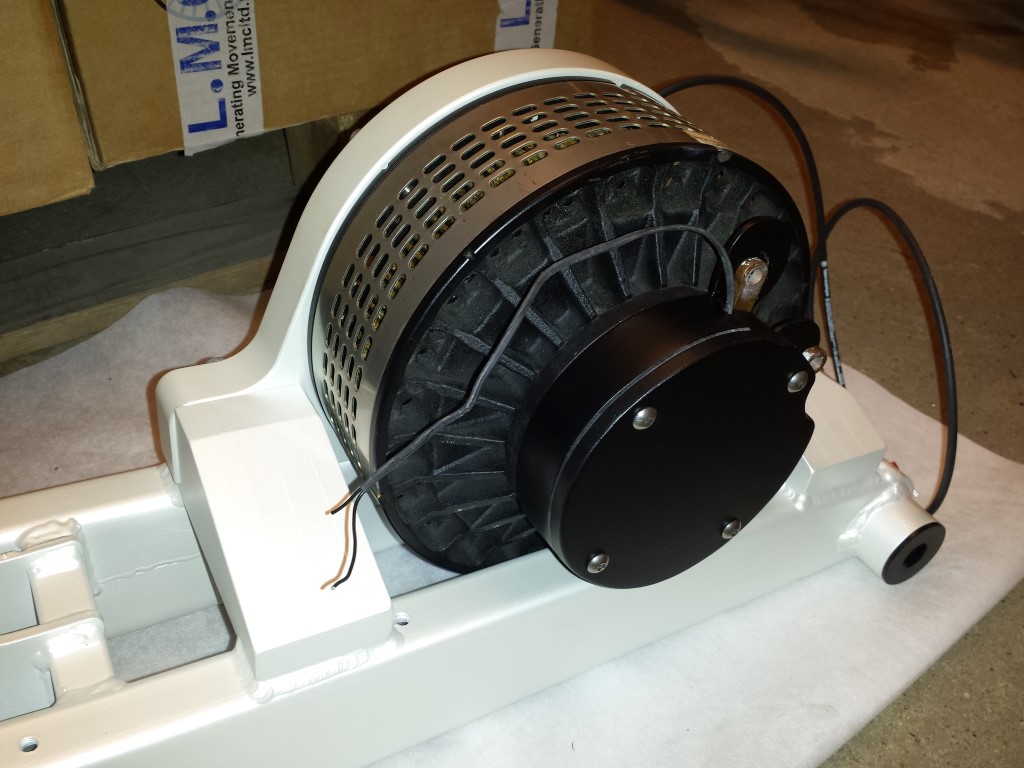 Then I wanted to place the rear swingarm onto the frame. Wasn't really easy since it weighs about 15 kg in total with the motor on it. With the POM bushings in it it's also just a bit wider so I had to push the mounting points on the frame outward a bit. After that I was able to get it in pretty good with some help of the rubber hammer again and a few extra hands. 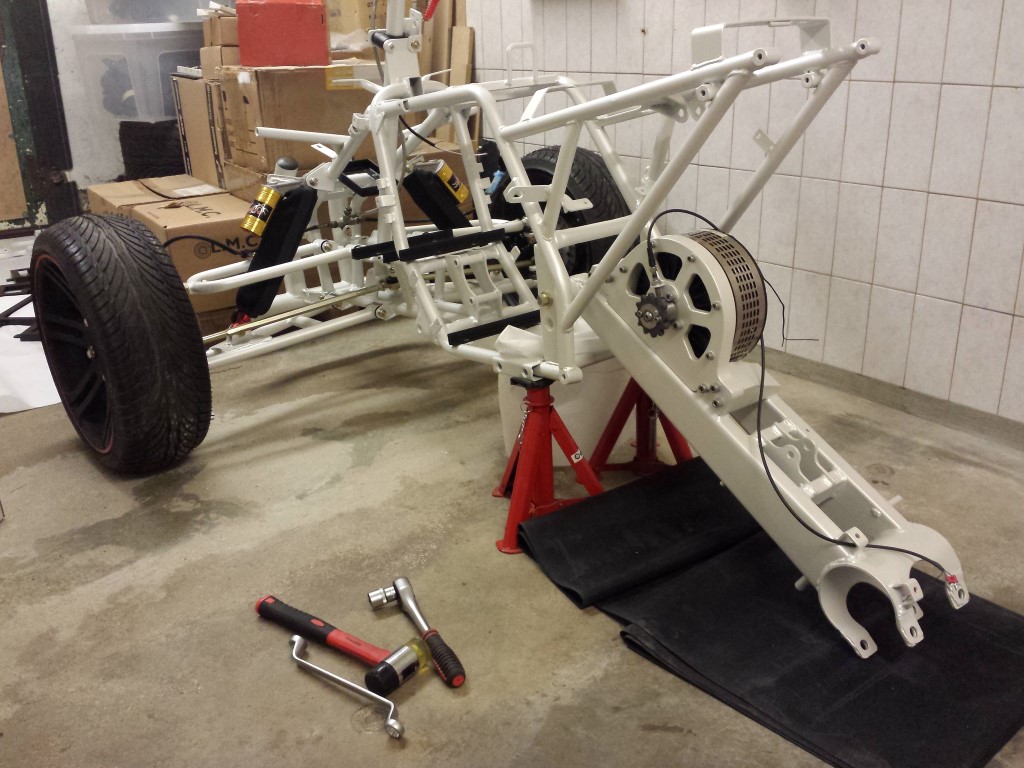 Shock with shock cover attached and the bearing house in the rear swingarm. 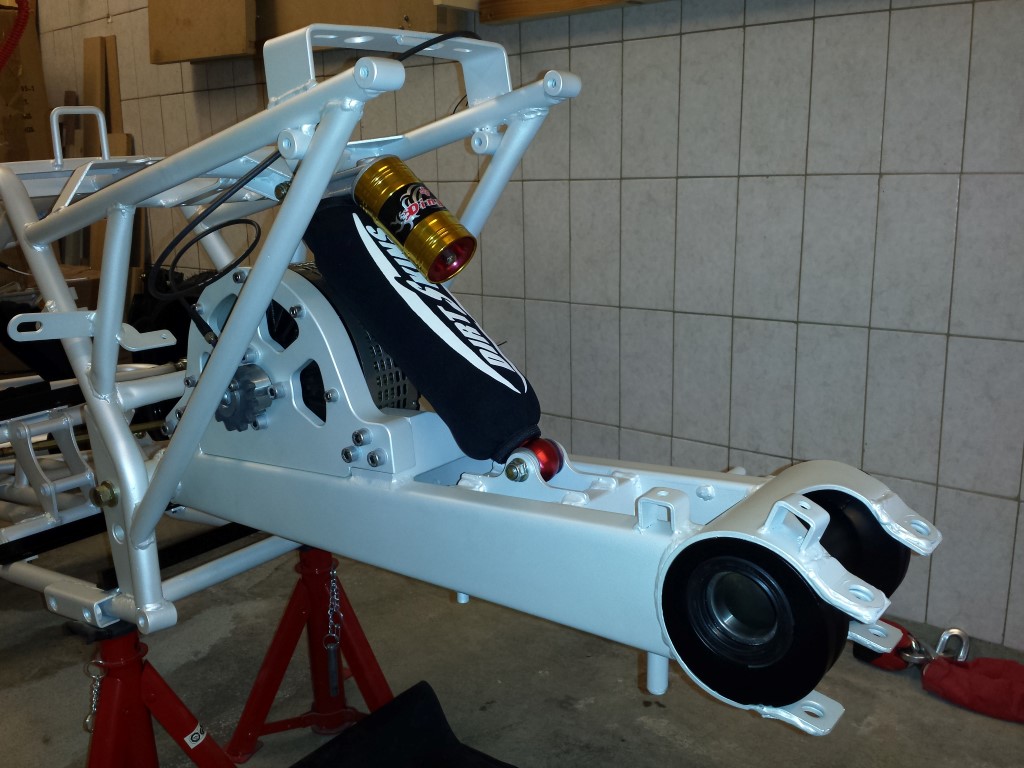 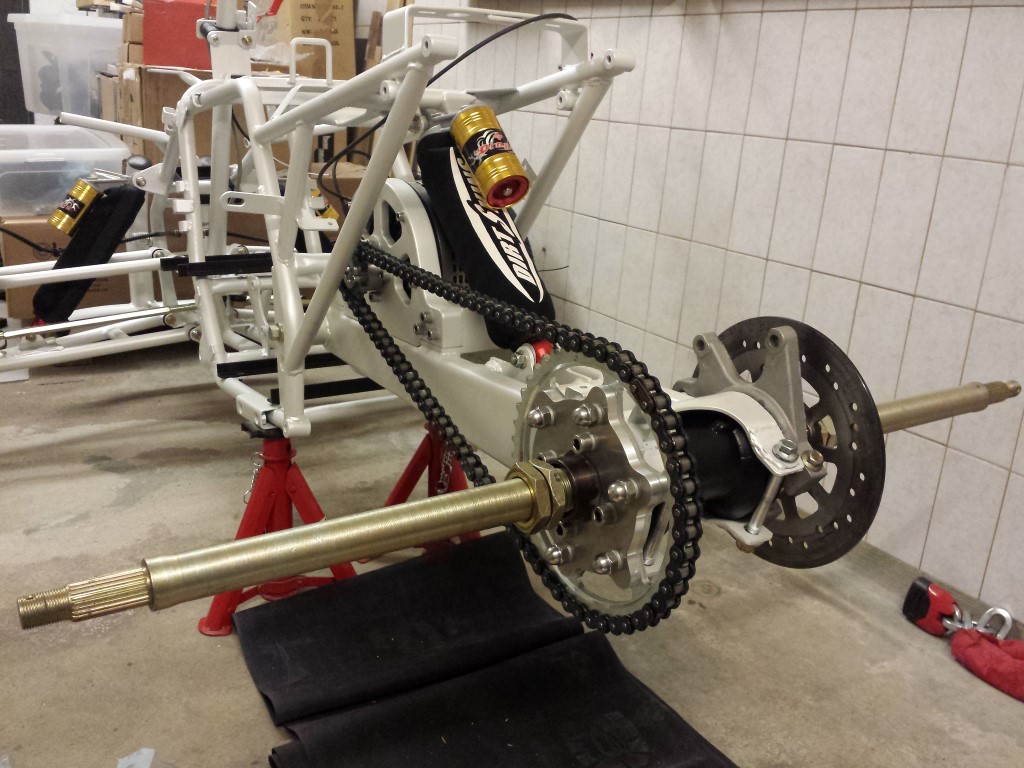 And then I could place the wheel hubs and the wheels themselves. Finally the quad bike is standing on all 4 of its wheels again. 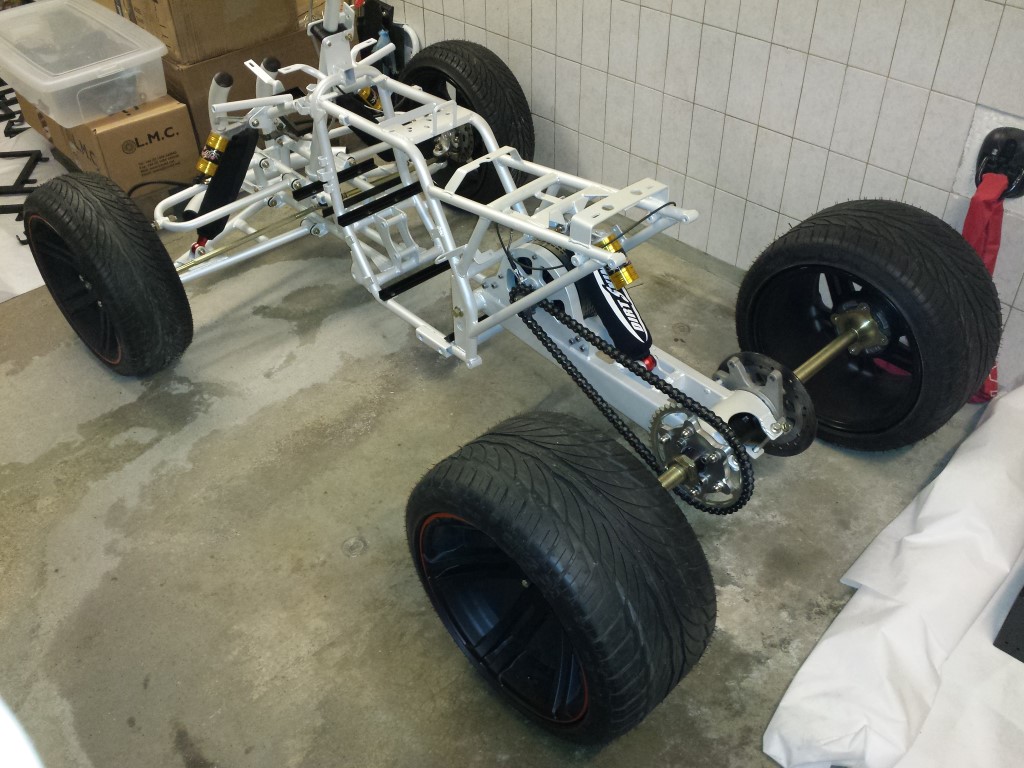 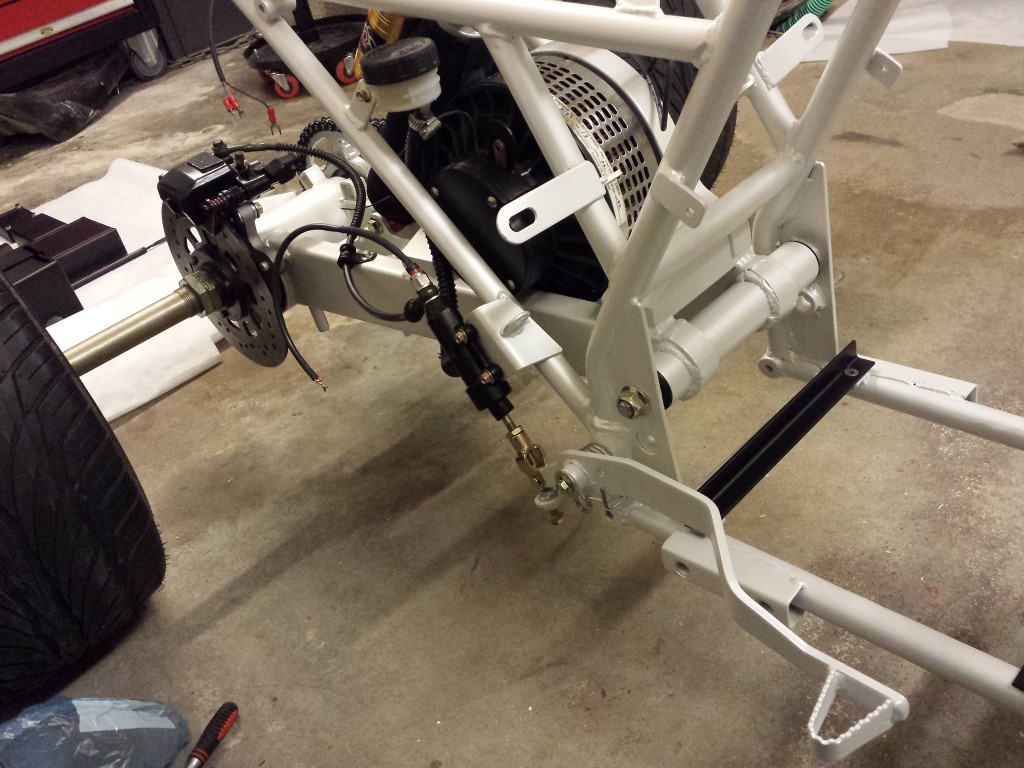 And then I thought it was enough for today. Tomorrow afternoon and evening I'll continue again. What I did already notice is that the quad bike rolls much easier now than before. Think this has something to do with the new bearings. Always had to push it a lot harder when the old bearings were still in it. Or perhaps the brake pedal for the rear just wasn't properly adjusted, this is also quite better now I think.

Just another picture of how the quad bike looks like right now. Really starting to look like something again. 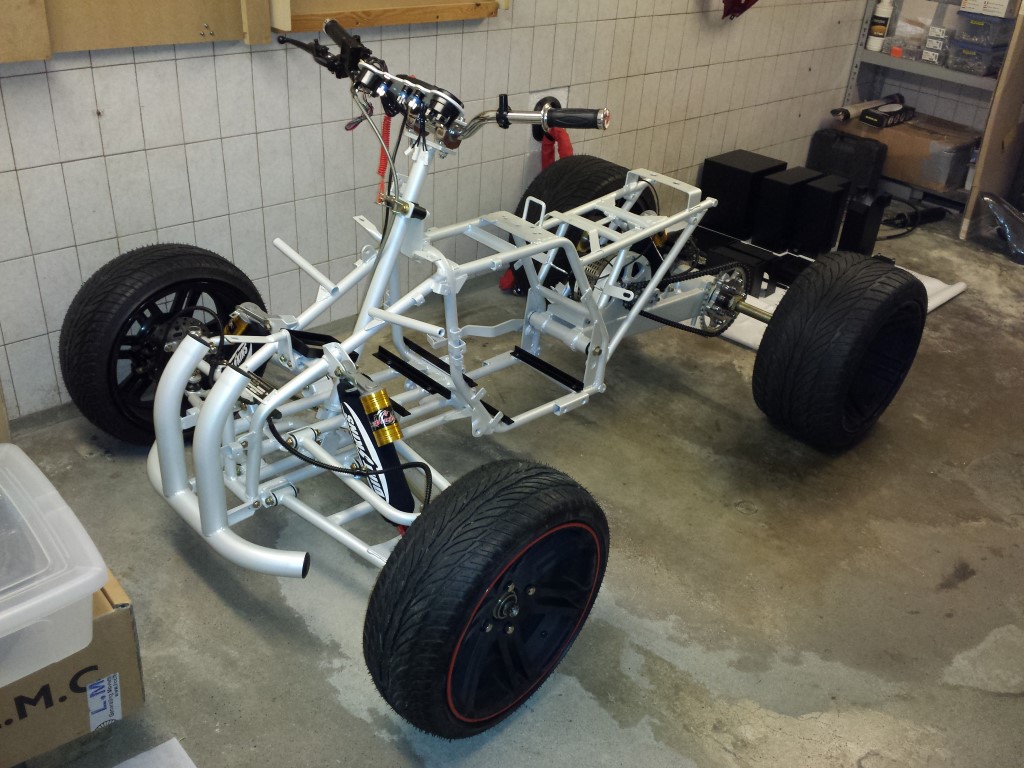