Today I went to the RDW again together with my sister to get the quad bike approved. We left a bit later than last time since I had to wait for a very long time back then. Now we arrived there at around 7.40 am. 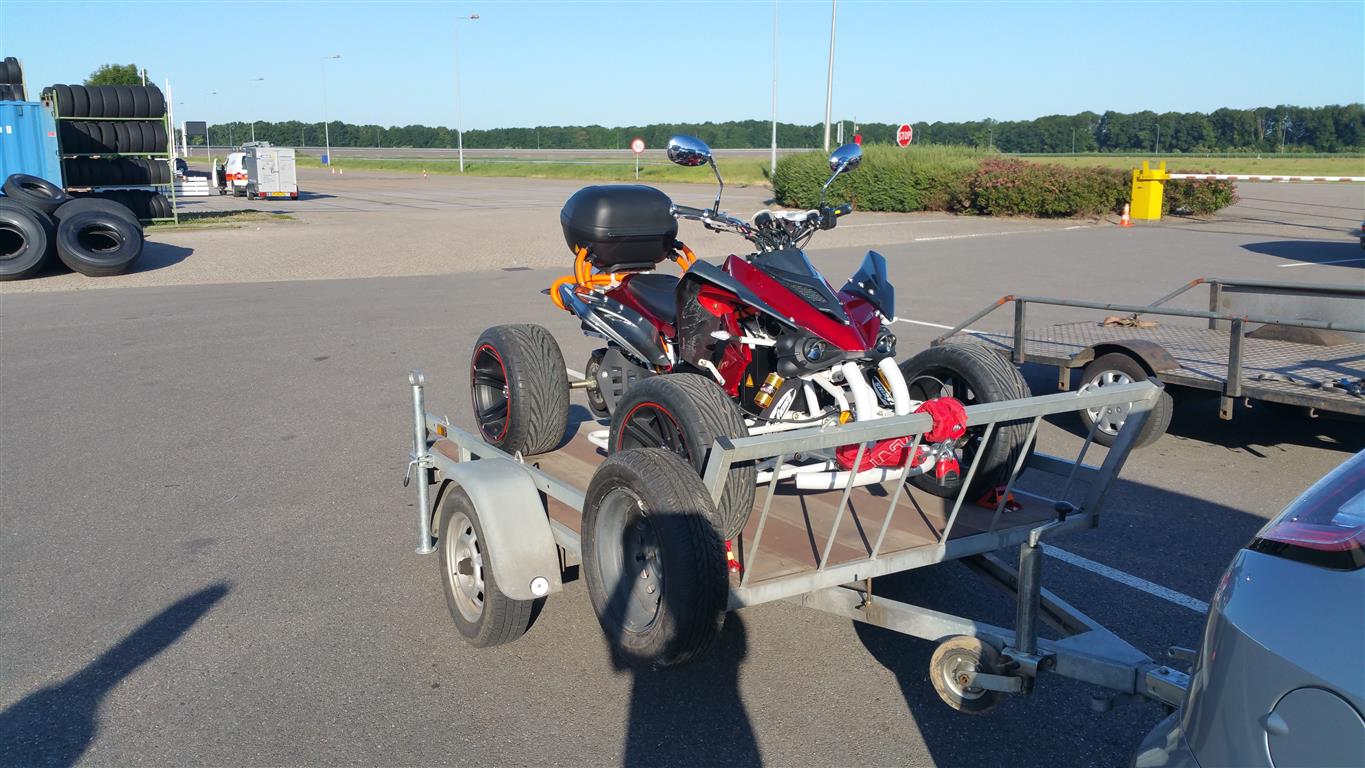 The approval test started quickly after we arrived already. In the beginning we weren't really sure yet if all would go well. I had no idea which things they were still going to check exactly. They also measured things that I haven't even measured myself yet. But it seemed to be going into the right direction.

Unfortunately we were not allowed to take any pictures during the approval test since there was a certain familiar British car manufacturer that makes sports cars who were testing their new model. It was really great to see but because of this I can't really show anything they've done with the quad bike for the approval. In any case, they did try to measure a few things, including the voltage of the batteries, isolation resistance between positive, negative and the chassis, and also if all components were properly grounded. This last one however didn't really work out so well since all of the enclosures I used are made of plastic. They can't measure anything there so they just skipped them. :) Only a few things that are made of metal (motor, charger and contacts of the charge inlet) they were able to measure.

After all these measurements it was already almost certain that the quad bike would be approved. Everything was tested and they weren't able to find anything wrong, they were even impressed with how well it's put together and that everything is perfectly protected. I didn't even get to see the notorious test pin or test finger they use to check for any voltage.

But then the inspector wanted to do a drive test to check the handling, determine the top speed and see if the tachometer is properly calibrated. Now I did know already that the motor still has some problems with the temperature and the outside temperature was already pretty warm today. So the motor also got too hot pretty quickly already and the inspector had to keep waiting for the motor to cool down. I was really afraid that this would affect the result of the approval test in a bad way. But thankfully not, this also went good. :) I explained that I will ofcourse fix this by adding some sort of active cooling onto the motor. But he really had a lot of faith in it, for the rest he just couldn't find anything that was wrong.

There still was another small issue though which I really have to look into. Apparently the tachometer shows double the actual speed after reaching about 90 km/h. I didn't even see this myself yet since I haven't actually been able to reach the top speed myself. I think the magnet of the speed sensor just isn't positioned properly which makes the sensor see it twice on high speed. This could've also killed my chances for getting it approved but since the tachometer displayed the speed just fine otherwise and was also calibrated properly he apparently was okay with it. Or maybe he did actually reach 190 km/h? :D 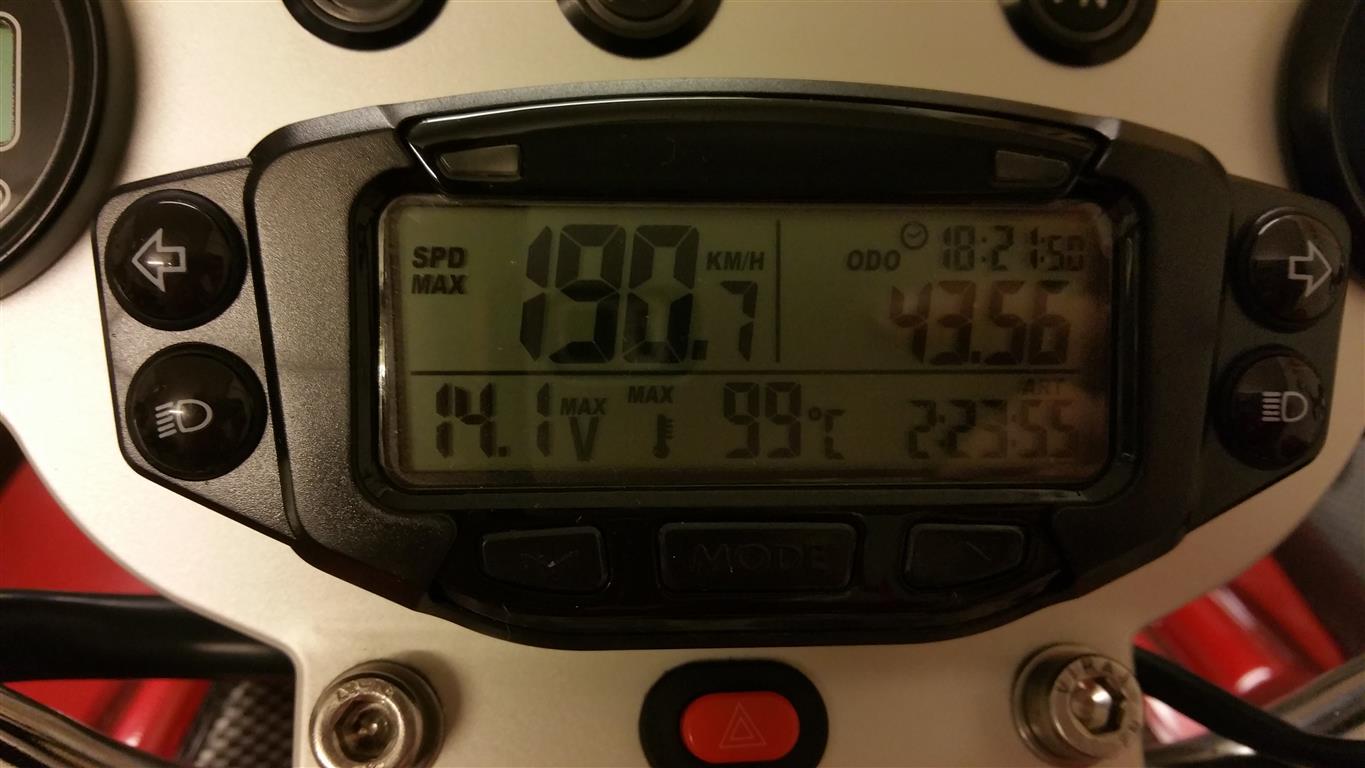 Eventually he told me I could place the quad bike back onto the trailer again. And then I finally knew for sure, the quad bike is approved! :D After the 2,5 years I worked on it my patience finally got rewarded and my end goal of getting the quad bike road legal has been accomplished. I'm really very happy with this and I think I won't forget this day for a long time to come. Now I just have to wait for the new registration documents, these will probably come within 5 working days. Then I can finally go out and enjoy riding it. :)

These pictures we still made on the way back home, we really did come home with a very happy feeling. :D 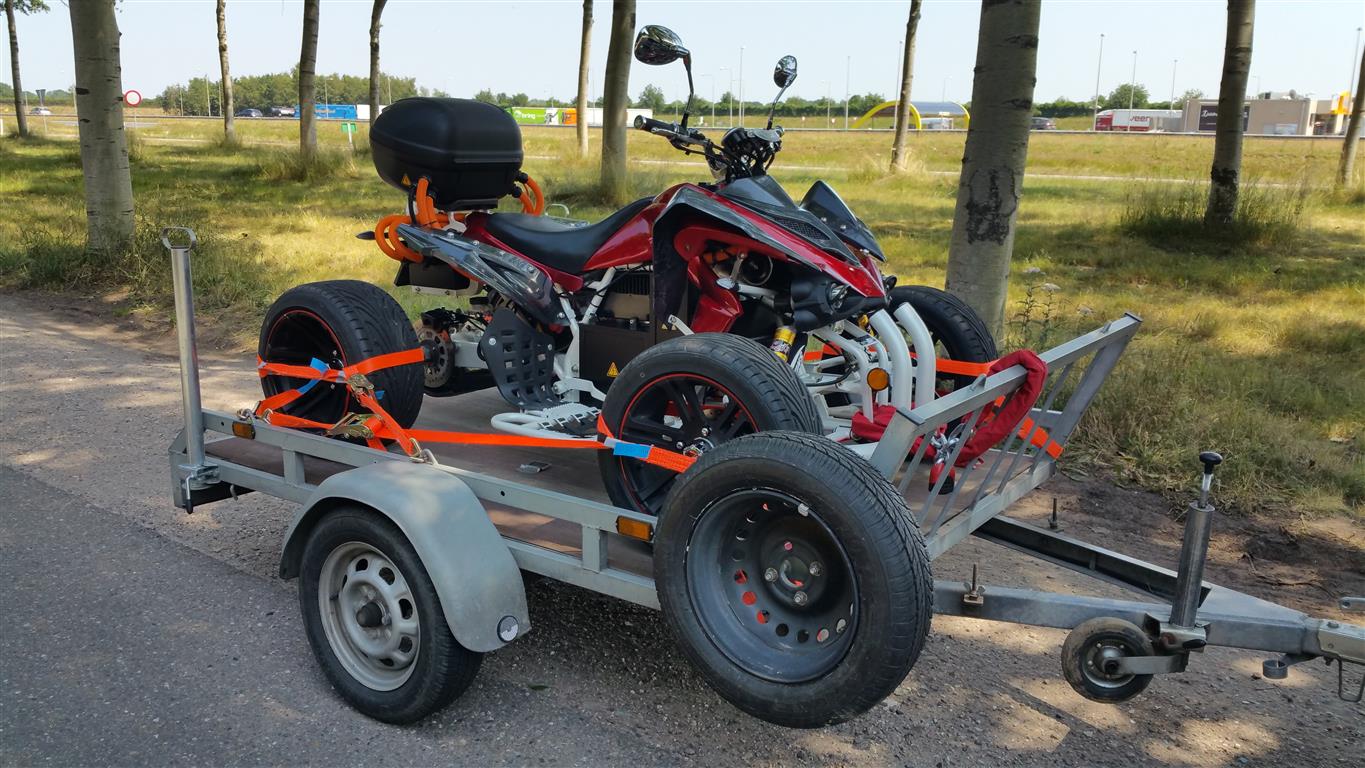 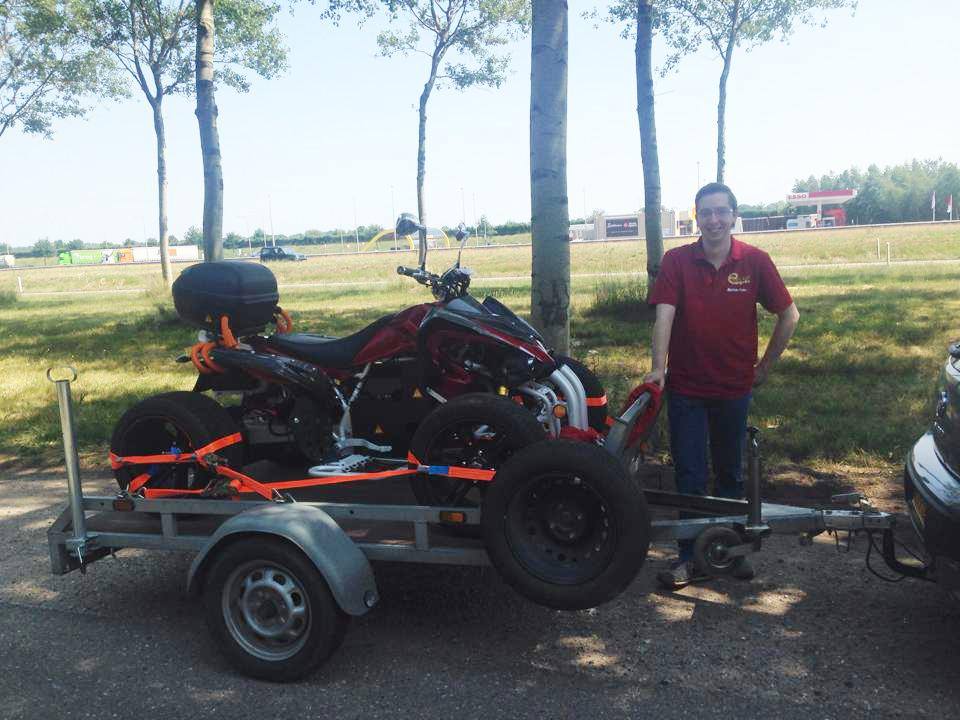 To be sure I tried again with the old brake cylinder and as it turns out it's still working great. I also discovered why I wasn't getting any brake pressure with this brake cylinder last time. I totally missed this one washer that apparently comes with a new banjo bolt with built in brake pressure switch. It has exactly the same color as the banjo bolt. 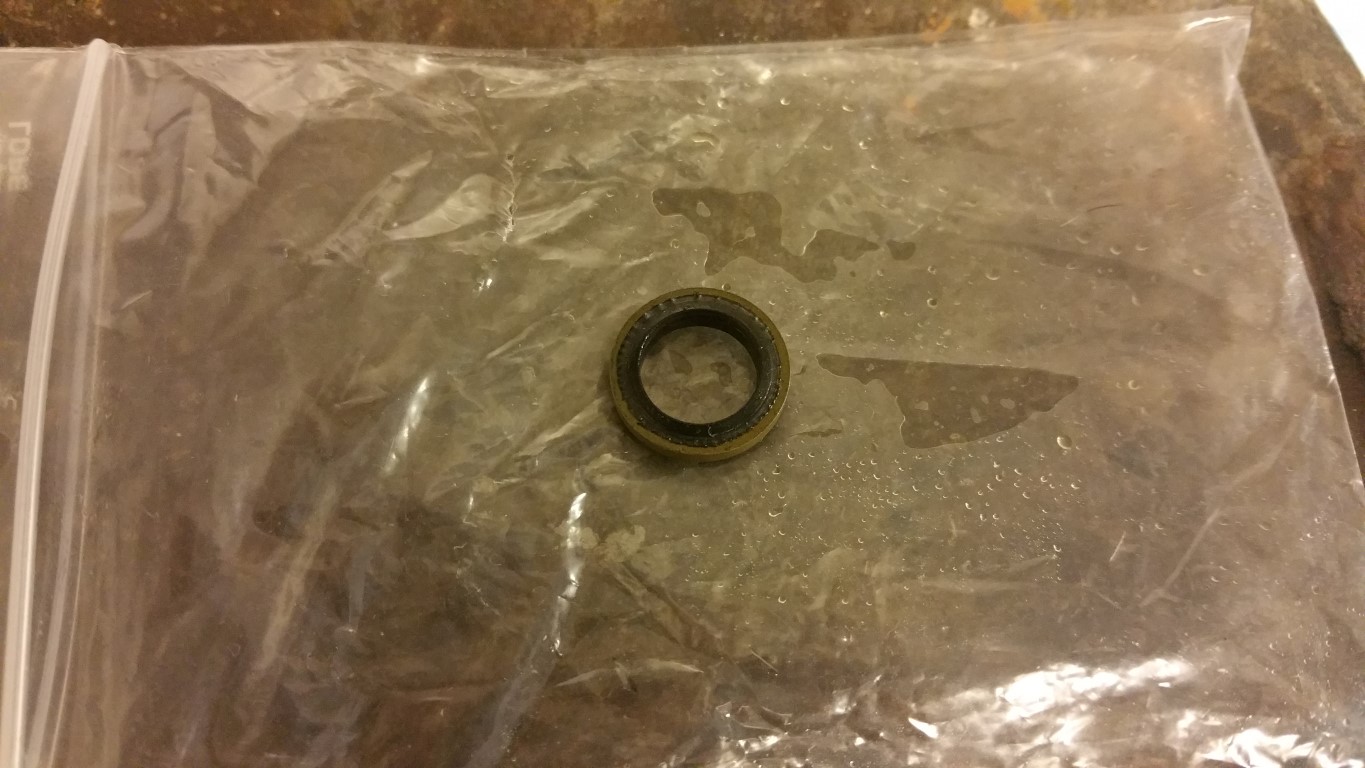 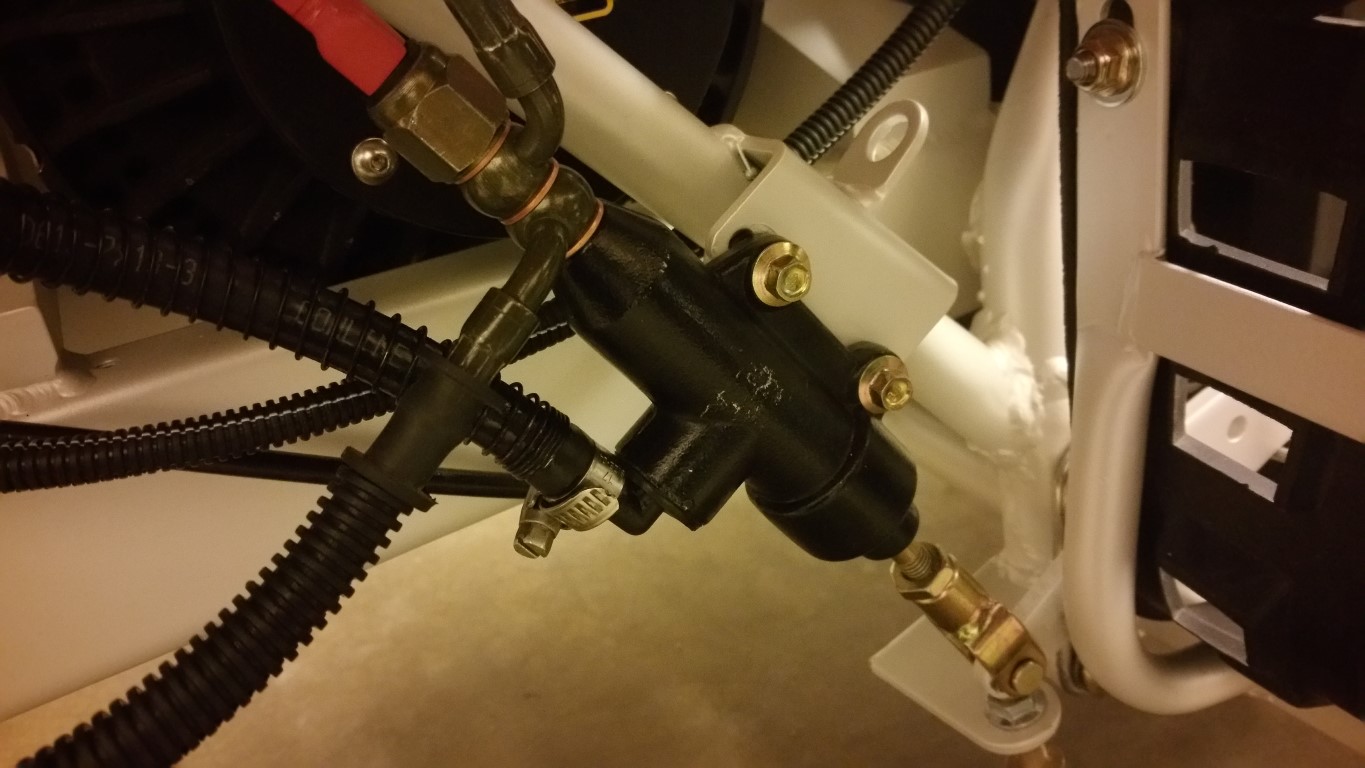 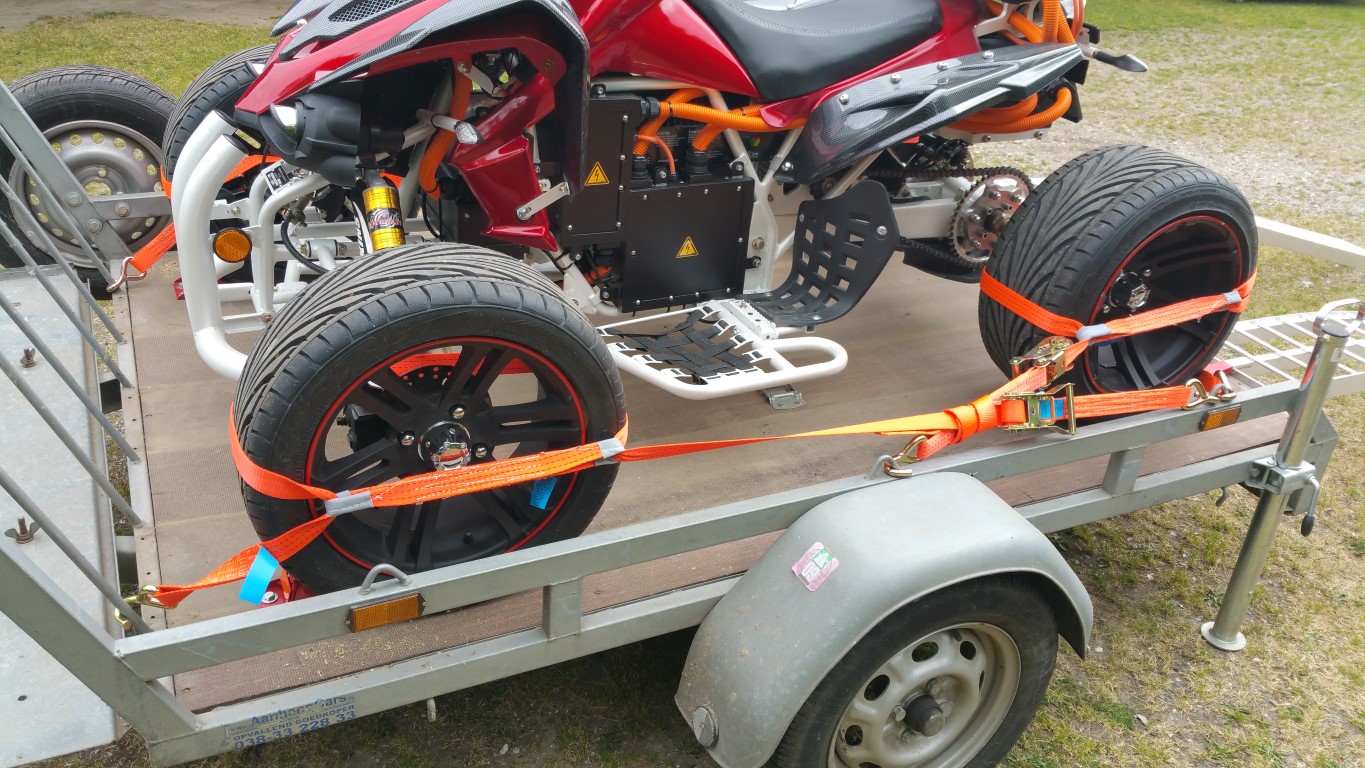 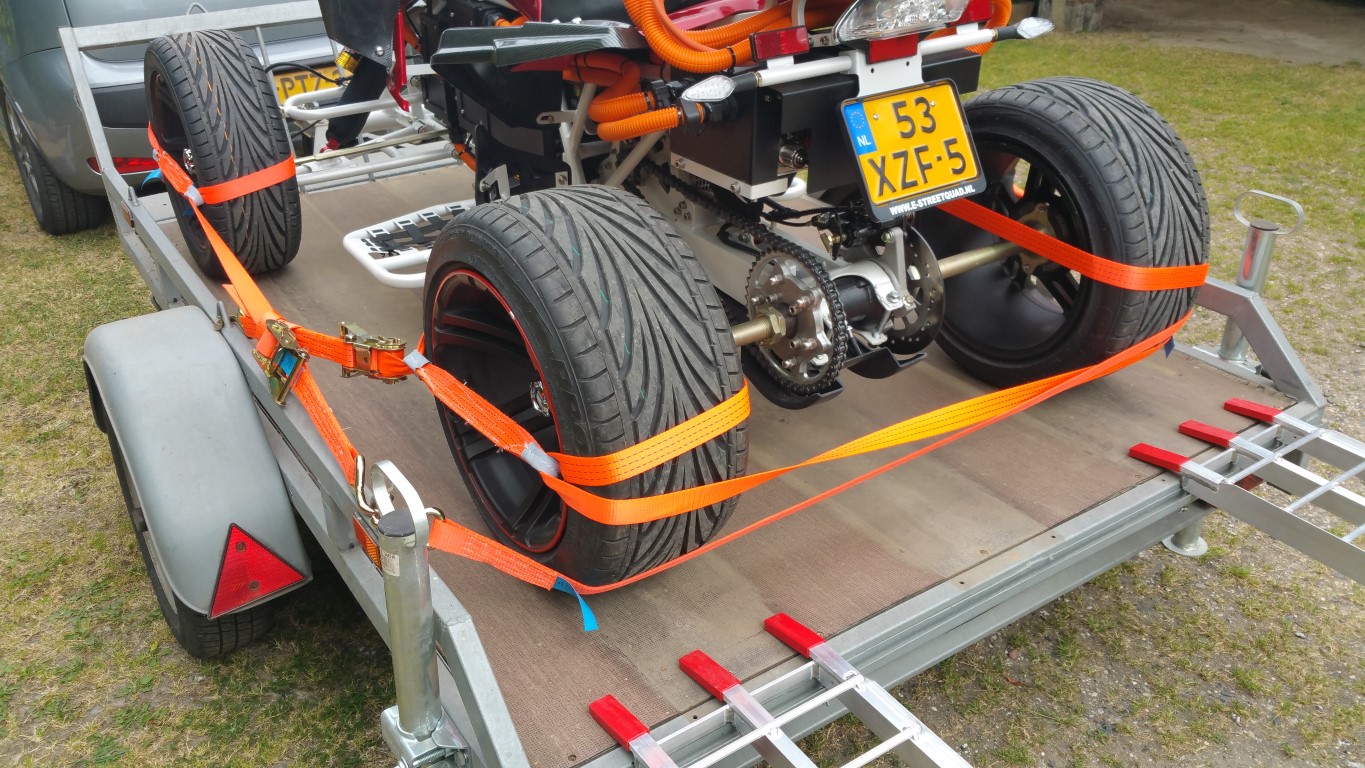 Now I just still have to wait for the approval test. Meanwhile I do finally have an appointment. The approval test will be in 9 days already, on June 30th. Will have to be there at 8 o'clock in the morning again. It's going to be very exciting again, but I have faith that everything will go just fine this time around. :) I also really hope so cause I finally want to go out on the road and ride it. ;)

One last modification and some good news

Today I made one last modification. At the RDW they said the visors on the headlights are too sharp. They're right about this but it's standard so it probably also got approved like this. 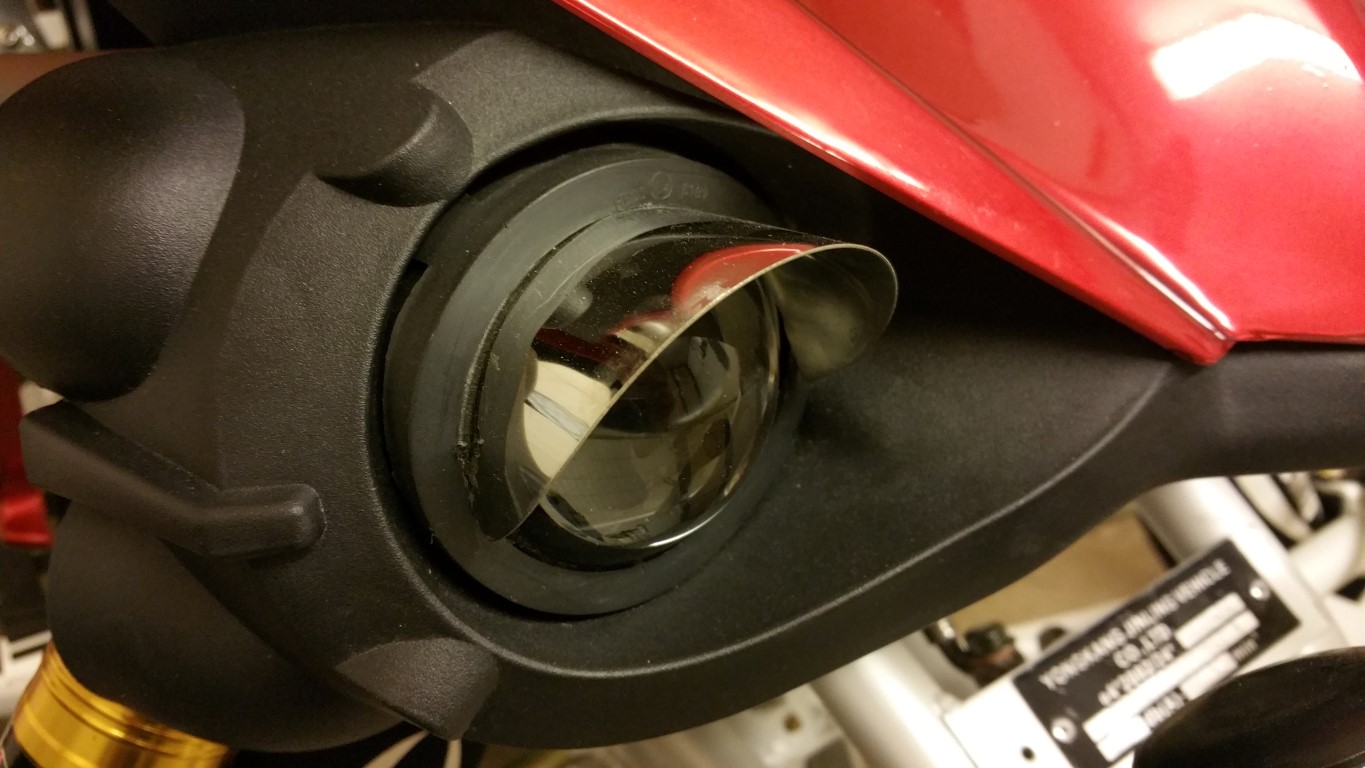 To keep them happy I placed some rubber profiles on it. The sharp edges are gone now and it still looks pretty good. 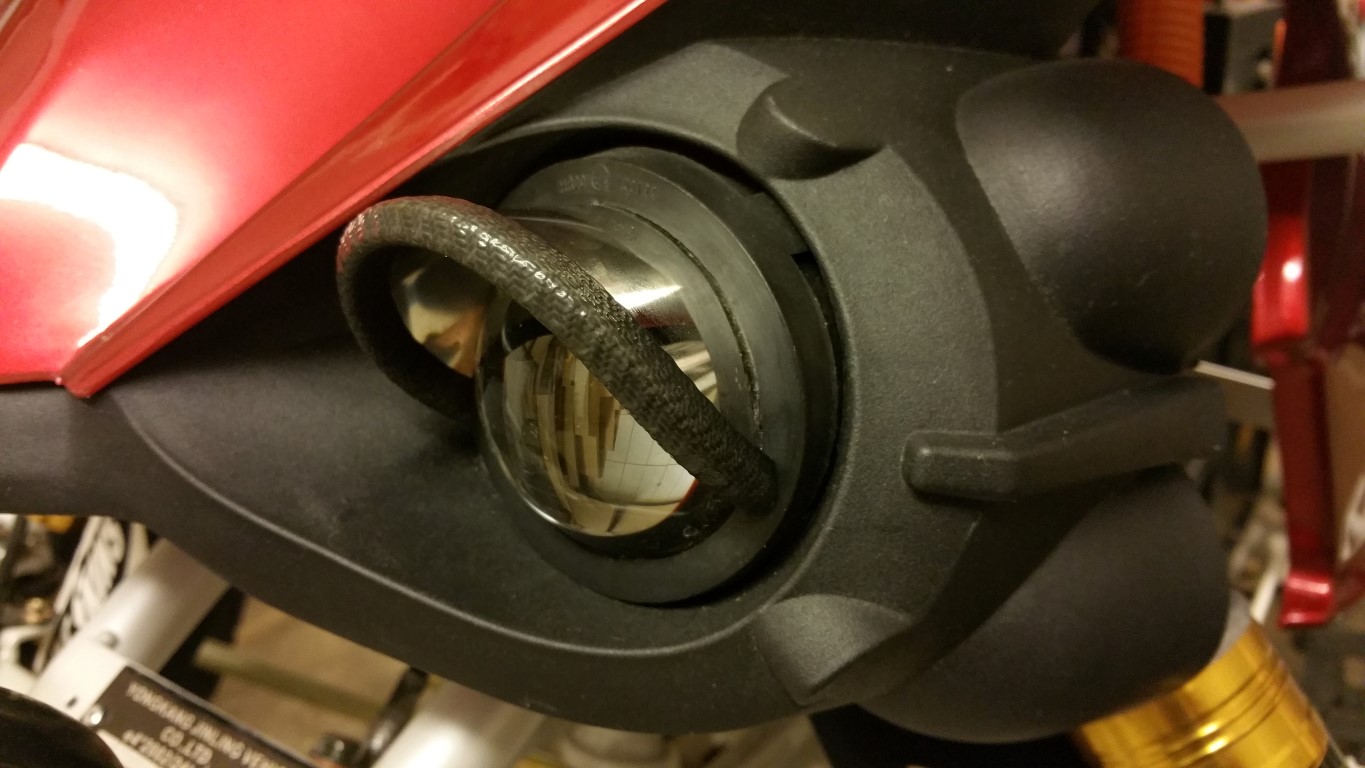 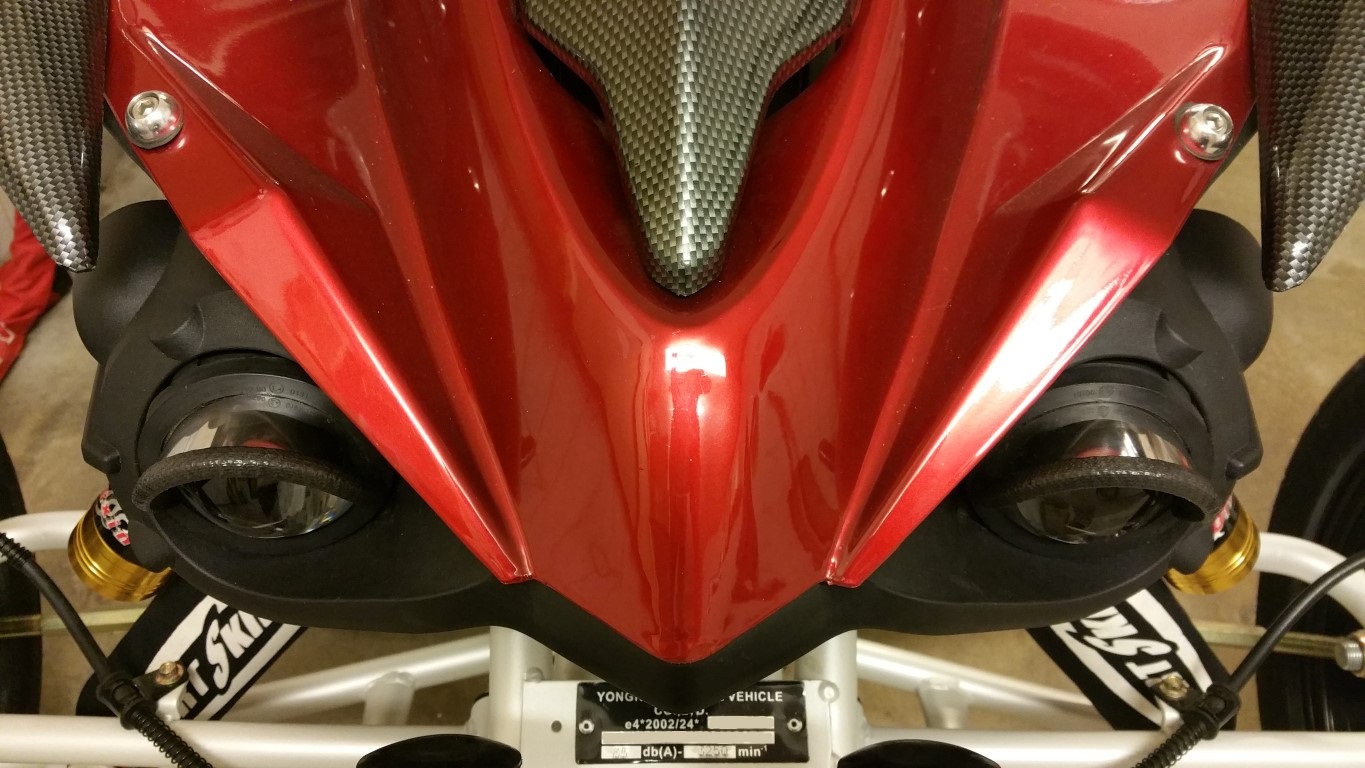 There's also some good news. I don't have an appointment yet, already trying for 2 weeks but can't seem to get a hold of the one who schedules the appointments. I did still come in contact with the inspector though.

It was still a bit unclear if a seperate EMC test for the whole quad bike would be needed, which normally costs around 1500 euros, or if the certification and test report of the controller would be enough. Thankfully the inspector told me that it won't be needed and that the certification of the controller is enough right now. So the EMC part of the approval is finally done and over with. This was also the hardest part but I won't have to worry about it any longer.

But there's also some bad news, thankfully not for my own quad bike though. At the RDW they're planning to sharpen the regulations for EMC even more. This will already happen very quickly since for my quad bike they discussed if it would still fall under the current regulations. So in the future it'll become even harder to get an electric conversion approved at the RDW. I think an EMC test for the whole vehicle will be mandatory then, or all of the components should be approved. But for my quad bike this is not a problem thankfully.

Now I just have to wait for an appointment, the quad bike is all ready for it again. Hopefully I'll hear something from them this coming week.